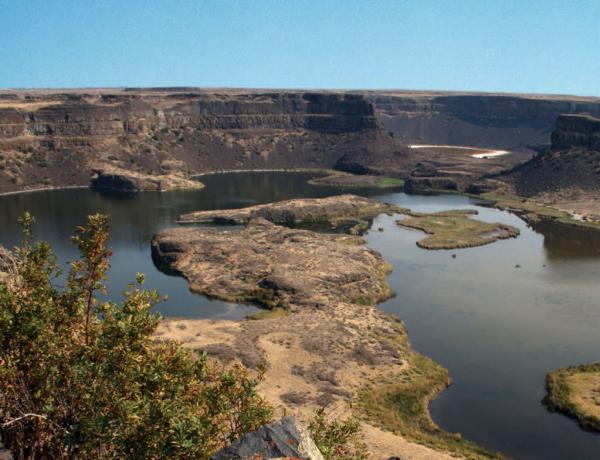 As the name suggests, Dry Falls no longer carries water, but is the remnant of what was once the largest waterfall known to have existed on earth.  Viewing the 3.5 miles of sheer cliffs that drop 400 feet, it is easy to imagine the roar of water pouring over them.  (Niagara Falls by comparison, is one mile wide with a drop of 165 feet).

The falls were created following the catastrophic collapse of an enormous ice-dam holding back the waters of what has been named "Glacier Lake Missoula".  Water covering three thousand square miles of northwest Montana, about the volume of Lake Ontario, was locked behind this glacial dam until the rising lake penetrated, lifted and then blew out the ice dam.  The massive torrent (known as the Missoula Flood) ran wild through the Idaho panhandle, the Spokane River Valley, much of eastern Washington and into Oregon, flooding the area that is now the city of Portland under 400 feet of water.

Reaching the Dry Falls area, this tremendous force swept away earth and rock from a precipice actually 15 miles south of the falls near Soap Lake, causing the falls to retreat to its present position, now known as Dry Falls.  The falls is said to be a spectacular example of "headward erosion".  If this is confusing, given the present topography, it also helps to know the falls are on an ancient course of the Columbia River.  The river had been diverted this way by the encroaching glaciers.  It returned to its present course as the ice retreated.